If you were to ask about the safety of skydiving in the 1970s and early 1980s, the answer wouldn’t be what it is today. Modern skydivers look at past gear and wonder how any of the jumpers came through that period alive — equipment often consisted of modified military surplus gear, known as gutter gear.

The old-timers marvel at the skydivers of today who don’t have to give nearly as much thought to the survivability of the gear they’re wearing. Over the last 20 years, skydiving has evolved into a multibillion-dollar industry between military and civilian operations. In fact, the technology used to manufacture this high-tech gear is as impressive as the finished product. Laser-cutting tables that measure pieces of nylon with perfect precision lead to minimal waste in the creation of aerodynamic wings (calling it a parachute doesn’t conjure the right visual).

The software used to create the 3-D renderings of the parachute planform allows engineers to create wings that designers from 20 years ago could never have imagined. It could be said that a skydiver in 2020 has more computing power in their equipment than the NASA astronauts who landed on the moon in 1969!

The result of this technology has led to a much safer sport. It’s nearly unheard of to read about skydiving accidents originating from gear malfunctions. Usually, they are now the result of pilot error.

AADs and the CYPRES

The technology that revolutionized skydiving started with the introduction of the automatic activation device. The AAD is a small computer is located in the skydiver’s container system (backpack), and measures speed and altitude during free fall and intelligently recognizes when a skydiver has descended below a predetermined altitude without having deployed a parachute. Once this altitude threshold is crossed — usually between 750 and 1000 feet — at high speed, the device automatically activates the reserve parachute for the skydiver.

The concept of AADs had been around for several decades but they were unreliable and often misfired when they weren’t supposed to, causing the skydiver great injury. The last straw came when an engineer from Germany named Helmut Cloth lost his close friend, Freddy Leising, during a skydive in 1986 when Leising lost altitude awareness and was unable to deploy his reserve in time. Helmut felt that something had to be done, and he invented the first 100% reliable AAD known as the CYPRES — the Cybernetic Parachute Release System. Since that time, the CYPRES has never failed and has been credited with saving over 4,000 lives!

The three-ring release system was invented by the legendary Bill Booth, whose design revolutionized skydiving and how all parachutes are released or cutaway. Back in the early days of parachuting, if a skydiver had a malfunction with the main parachute, it was always a task to release the main in order for the skydiver to deploy the reserve. The transition from main parachute to reserve was clumsy and often led to severe injury or death. The three-ring release system allowed skydivers to pull a handle which easily releases the main from the harness container, or backpack, very quickly. The video below shows how the rings easily release through themselves. It’s simple, yet genius!

A major cause of skydiving fatalities is the loss of altitude awareness during freefall. A CYPRES is designed to be a skydiver’s last chance of survival, but of course it’d be preferred if that point was never reached. Altimeters have evolved from simple instruments that read barometric pressure on a skydiver’s wrist to advanced tech that reminds skydivers digitally on their wrists, send audible alerts in their ears and even light up to remind skydivers visually of their altitudes.

Did you think your FitBit is fancy? The Dekunu One captures so much data, it’s incredible! This wrist-mounted device is Bluetooth and WiFi enabled, tracks GPS (so you can see how you descended through the sky), measures compass direction and ground speed when under parachute, has an automated log book, gives local weather reports and has other data reports too numerous to mention here. And it comes in a variety of colors to match your skydiving jumpsuit!

Sometimes skydivers may forget to look at their wrists and check their altitudes. It seems crazy, but it happens, so the fail-safe to that? An audible altimeter. It fits into a skydiver’s helmet and uses different alarms that alert skydivers of where they are during the free fall.

The use of color altimeters has been introduced in the last couple of years. Skydivers can now attach LEDs within their skydiving helmet face shields and visually see different light patterns based on altitude. It’s a brilliant concept that’s getting a lot of attention as it helps make skydiving even safer!

The technology surrounding skydiving continues to evolve and the future of skydiving has never been more exciting. The sport will always have its inherent risks, but it’s getting a lot safer. We are proud to say that at Skydive the Gulf, we are using the industry’s most advanced gear in order to keep our customers as safe as possible. 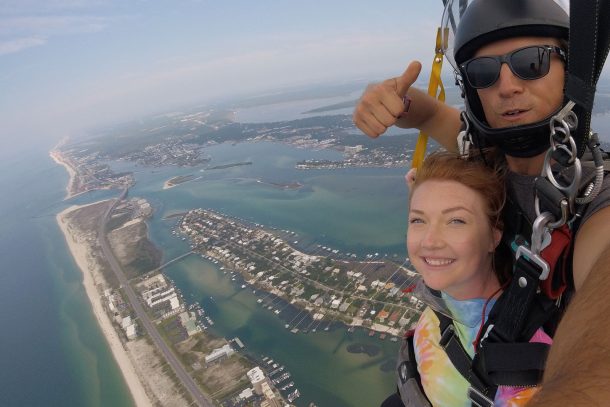